How Antibiotics Can Help With Your Chronic Sinusitis 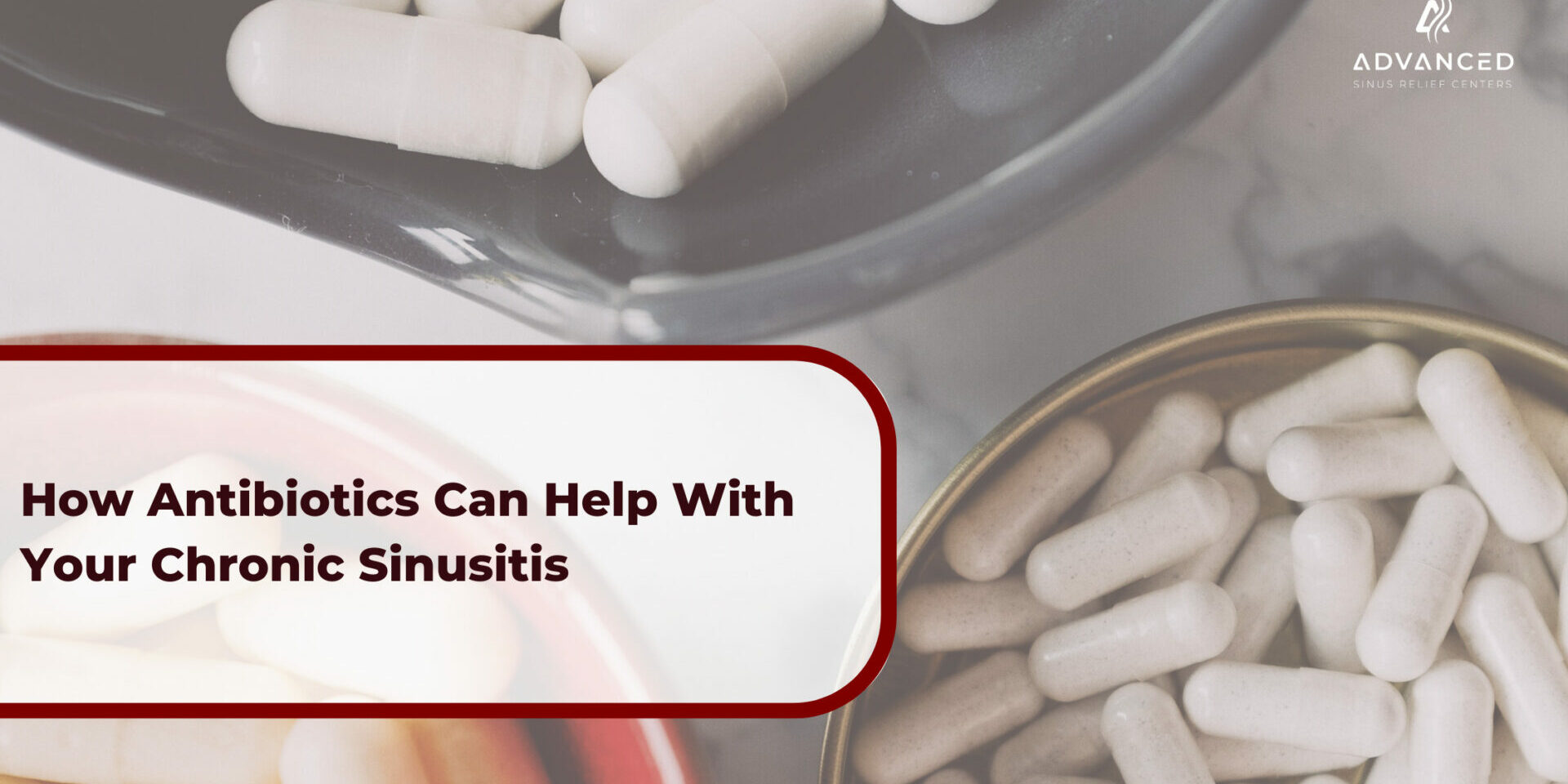 How Antibiotics Can Help With Your Chronic Sinusitis

The sinuses are made of soft mucosal tissue and small hairlike structures that moisten and filter air as we breathe. Sometimes these tissues become inflamed by infections, like the common cold or allergies, which prevents mucus from properly draining. The mucus continues to be produced, but pools in the sinuses. This creates an environment that is perfect for bacteria or viruses to thrive.

When sinuses get infected this way, it causes an array of symptoms such as:

These symptoms can make it hard to accomplish even the simplest of tasks. Generally, these infections are expected to run their course over about seven to ten days. Over-the-counter medicines are commonly used to alleviate pain and congestion, but this environment can make it difficult for the body to properly remove the bacteria. This can lead to more chronic sinus issues as the infection spreads and inflames more tissue creating a vicious cycle.

Antibiotics are prescribed to help actively kill bacteria so your body can more easily handle the effects of infection and create a more effective immune response. There are a variety of antibiotics that doctors can prescribe for sinusitis. Each type of antibiotic kills bacteria and affects the body differently. Your doctor will prescribe an antibiotic based on your symptoms and medical history.

The most commonly prescribed antibiotic is azithromycin. It works by binding to the parts of the bacteria that produce RNA, which prevents the bacteria from growing or multiplying. The bacteria die out without being able to spread, reducing the inflammation in the sinuses. This makes azithromycin a very general antibiotic, working for diseases throughout the body. Unfortunately, azithromycin has minimal effectiveness in deep-rooted or chronic infections. This has become a double-edged sword because the prevalence of azithromycin has led to many bacteria becoming resistant to this antibiotic.

The preferred antibiotics for sinusitis are penicillin based: amoxicillin and Augmentin. These medicines work by weakening the cell walls of bacteria, essentially splitting them into pieces. Augmentin combines amoxicillin and a drug called clavunalate which helps prevent bacteria from producing an enzyme that nullifies penicillins. Unfortunately, penicillin allergy is the most common drug allergy, affecting at least 10% of Americans. People with kidney or digestive disorders may not tolerate these medications well even without an allergy.

Another option for bacterial sinusitis is a medicine called sulfamethoxazole-trimethoprim, more commonly known by the brand names Bactrim or Septra. This drug is actually a combination of two medicines that both inhibit the production of folic acid which is necessary for the survival of bacteria. Generally this medicine is used for urinary tract or respiratory tract infections, but has shown great effectiveness in treating sinusitis. It is best used when amoxicillin or azithromycin have failed or are poorly tolerated by patients. This medicine is metabolized in the liver and kidneys, so steps must be taken to avoid damaging them. Kidney stones and damage can be reduced by drinking plenty of fluids. The liver can be protected by limiting use of alcohol or drugs like acetaminophen which also cause stress to the liver.

A final option, and generally a last resort for sinus infections, is levofloxacin or Levaquin. Levofloxacin works by inhibiting the bacterial organelle that constructs DNA, preventing bacteria growth. Unfortunately, levofloxacin has a wide variety of dangerous side effects. It causes inflammation in tendons and joints, so older people, or people who play sports are at higher risk for tendonitis. In some cases a tendon can rupture, which is painful and difficult to recover from. It also affects brain and nerve structures and functions, particularly in those with a history of seizures, stroke, or other brain lesions. This can lead to seizures, confusion, dizziness, paranoia, hallucinations, and possibly permanent damage to the nerves of the hands and feet. Individuals with myasthenia gravis should avoid levofloxacin as it can cause severe weakness in the muscles that control breathing. These side effects have led to levofloxacin becoming less commonly used for sinusitis, especially acute cases.

Are Antibiotics Right for You?

While you have many options for antibiotics to treat your sinusitis, your doctor will be the final say in what is prescribed. Your doctor will take into account all your healthcare considerations and prescribe a medicine that will fight infection and can be tolerated well. In many cases, the infection may be viral or secondary to a separate disorder. In some cases it can be caused by allergies which will require different courses of treatment. If you notice symptoms of sinusitis lasting more than ten days, talk to your doctor to see if an antibiotic is needed to manage your symptoms.