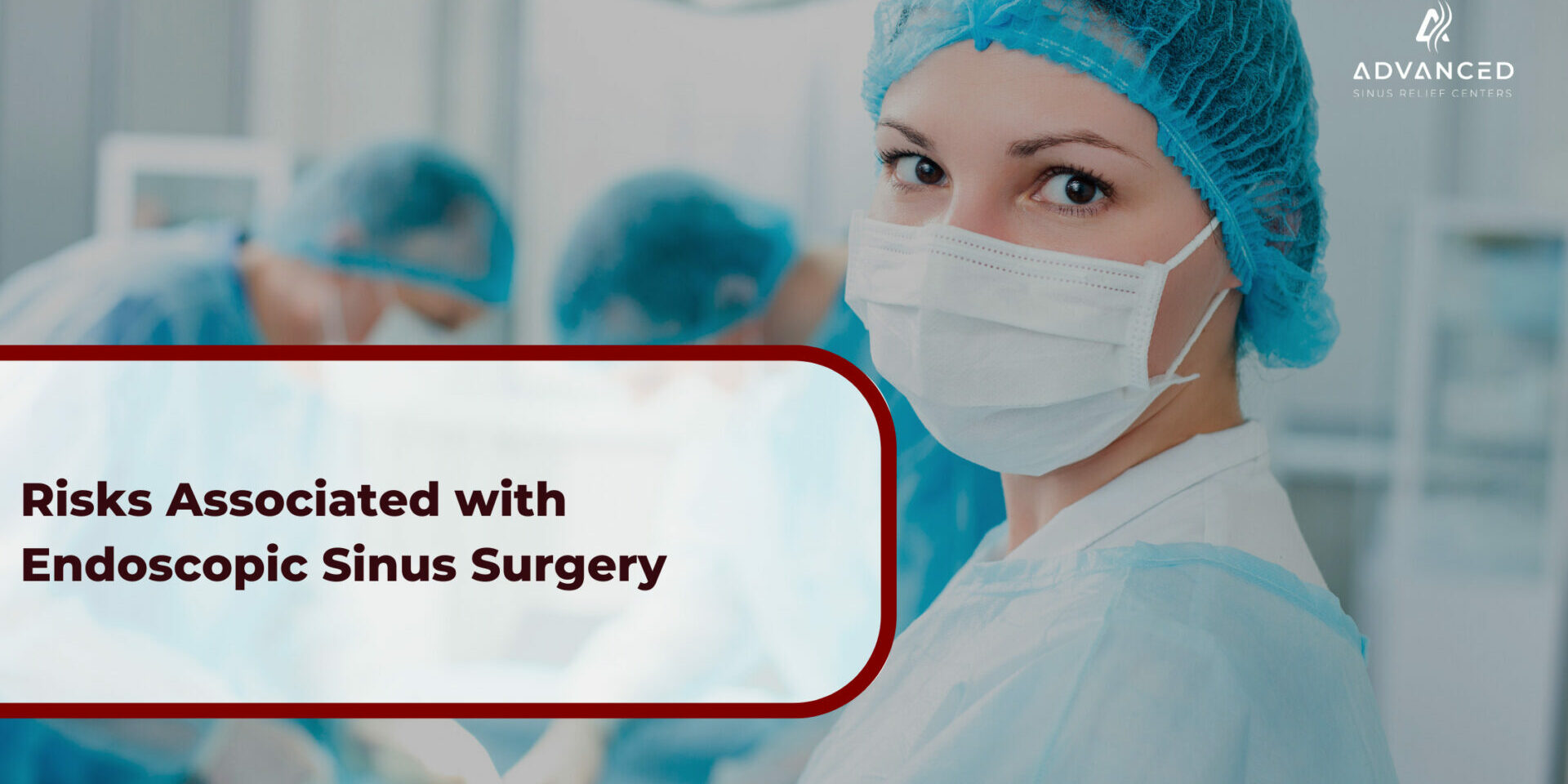 Endoscopic sinus surgery requires great care due to vascularity of the sinuses as well as their proximity to facial and cranial structures. While adverse effects tend to be rare, they can be quite severe. It is important to understand the associated risks before undergoing surgery.

Cerebrospinal Fluid Leak: The top of the sinuses are formed by the shape of the skull, and any intrusion through this barrier will lead to the leakage of cerebrospinal fluid. The opening through which leakage occurs creates an avenue for infection, namely meningitis, which can quickly become life-threatening. As a result, individuals with cerebrospinal fluid leaks must have corrective surgery performed quickly and generally require hospitalization to prevent any such infections.

Ocular Dysfunctions: The proximity of the sinuses to the ocular nerves, muscles, and orbital bones means there are chances for a few different ocular issues following surgery. Muscular damage can lead to persistent tearing, watering of the eye, or difficulty in focusing vision or turning the eye. Damage to orbital structures can similarly cause disruptions in vision such as blurriness or double vision, along with facial pain associated with fractures in the bone. Damage to the optic nerve will cause vision loss to some extent, and in rare cases can cause full blindness in the eye. These scenarios are rarely treatable with surgery and are often permanent.

Nasal Dysfunctions: While otolaryngology has been studied since the late 1800s, our understanding of the structure and function of the nose is still limited. This means that dramatic changes in structure can create a host of untreatable issues. Most commonly, patients will report a reduction in their ability to taste and smell for the first few weeks to months following surgery. In many cases this resolves itself, however there have been patients with permanent anosmia following sinus surgery. Many patients require

alterations to their septum during surgery, which creates a new pathway for infections and can even cause loss of feeling in the front teeth.

Empty Nose Syndrome: An unusual complication where the aerodynamics of the nasal and sinus cavities are altered, reducing proper exchange of oxygen and carbon dioxide. Patients with empty nose syndrome complain of pain, insomnia, and the feeling that they aren’t able to get enough air.

Surgical Complications: Endoscopic sinus surgery aims to reduce or eliminate symptoms of chronic sinusitis, but in some cases it may not alleviate symptoms at all. When this occurs, revision surgeries may be necessary to remove further tissue in an effort to reduce inflammation. There is always risk of infection during and after surgery, as well as risks associated with the use of general anesthesia such as muscle aches or weakness, nausea and vomiting, chills, and in more extreme cases, difficulty breathing, long-term cognitive impairment, and dysfunctions of the urinary and digestive tracts.

Complications from surgery are taken into account when the doctor orders a surgery. They hope that the risks of complications are lower than the possible benefits you will receive. However, complications are unpredictable by nature. Patients who may be at higher risks may want to try less invasive options to alleviate their symptoms.

Balloon sinuplasty is a minimally invasive alternative to endoscopic sinus surgery. This procedure forgoes cutting tissue by using a surgical balloon to reshape sinus openings. Forgoing the incisions means that there are fewer chances for complications. Since balloon sinuplasty doesn’t remove tissue, it’s not recommended for people with growths in their sinuses. Like any procedure, your doctor will have to consult you on whether it is the best option for your symptoms. If you’ve tried prescription or OTC medications with no relief, talk to your doctor about options for surgery.